Carpet history – The origin of carpets

With the invention of yarn spinning, weaving quickly came into being. This is how the first kilim carpets were created: simple flat weaves with geometric patterns that are still being made and sold . Where and how exactly then the knotted carpet was "invented" cannot be said, however. There are numerous different theories circulating about its creation, but none has been definitively proven yet. The only certainty is that it has around for over 2,500 years now.

According to one of these theories, the history of the knotted carpet begins in Central Asia – roughly in the area of present-day Turkmenistan. It was there that shepherd nomads are said to have made the first examples; the fluffy pile was intended to imitate animal fur.

According to another theory, knotting is a further development of the Sumak knitting technique in the Armenian cultural area. In the sumak tapestry technique, the pattern threads are looped around the warp threads to create a flat, kilim-like carpet.

The oldest known hand-knotted carpet is the Pazyrik carpet, which was made between the 5th and 4th centuries BC and was found in South Siberia in 1949 – in a burial mound in the Altai Mountains. Due to the frost, the Pazyrik has been surprisingly well preserved over the long period of time. Today it can be seen in St. Petersburg's famous Art Museum, the Hermitage. The finely knotted and intricately patterned carpet, measuring approximately 1.83 x 2 m, suggests that there must have been a longer tradition of knotting at the time of its creation. Originally it is said to have come from the Caucasus and to be of Armenian origin. 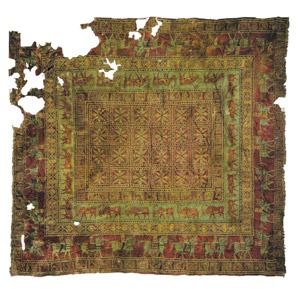